With majority of thanks having to go to Gareth Ward our local member for tirelessly pursing this issue, there were time when we doubted his commitment but I think Gareth has proven that he is true to his word, I know he worked very hard to secure this funding and I think ultimately badgered the Minister into submission on our behalf. So if you can it would be great if you could extend your thanks to him.

Personally I would like to thank all of you for your support over the past three years,  it is definitely not the end but just the beginning. The next step will be ensuring that any recommendations from the investigation are delivered but we are one step closer than we were three years ago. At this stage let’s just revel in the win, once again thank you all for your support and commitment.

Council has previously allocated $50,000 towards the project in response to the gradual shoaling of the Shoalhaven estuary.

The funding will allow Council to explore options to increase flow and circulation of water into the estuary at Shoalhaven Heads and prevent that section of the river from becoming a backwater.

Mayor, Joanna Gash said the gradual shoaling of the estuary was having a negative impact on water based activities, the local village and economy.

The Mayor said the funding would allow preliminary investigations into available preventative measures to stop the shoaling process.

“I would like to thank Member for Kiama, Gareth Ward and Minister for Primary Industries Katrina Hodgkinson on today’s funding announcement,” said Clr Gash.

“Currently, a significant portion of the flows from the river deviate into Berry’s canal before discharging to the ocean at Crookhaven Heads.

“This unfortunately results in limited flows reaching the lower Shoalhaven River estuary and with the entrance to the River being mostly tidal; there is very limited circulation or flushing in this area of the estuary.”

“This funding will assist Council in identifying potential mitigation options, costs and impacts on water quality and flood risks as well as the local oyster farmers and fisheries production.”

“Council will also need to take into account any potential impacts on the adjacent Berry canal and Seven Mile Beach.”

Minister Hodgkinson said that this study will be the next step in improving water flow of the Shoalhaven River and maximise public amenity for the popular public space.

“The Shoalhaven and South Coast is one of the most popular recreational fishing areas in NSW, attracting keen fishers from near and far generating $395 million in economic output each year,” Ms Hodgkinson said.

“This is not a problem of water quality, but of looking at options to better utilise the Shoalhaven River for the benefit of the local community.

“It is important we make the right decisions about the future of this important natural resource, whilst not compromising other parts of this complex estuarine system such as Greenwell Point and Crookhaven Heads.” 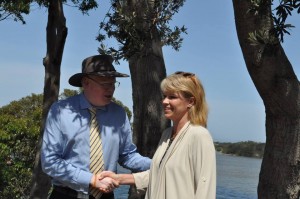 Concerns raised to council in 2012:

How long can our Estuary wait before the waterways are Mud Flats?

We propose that in lieu of more public money spent on another study, which is bound to endorse existing findings that a Permanent Opening at Shoalhaven Heads is environmentally detrimental and financially prohibitive.

That the funds Council has committed to yet another study would be better redirected in to the formulation and implementation of a plan to responsibly move the current build-up of sand and restore and sustain the health of the Estuary NOW.

We need your support to pressure council into addressing the issues within our Estuary.