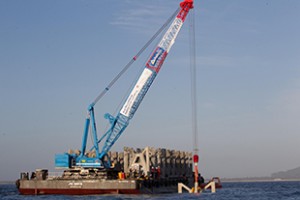 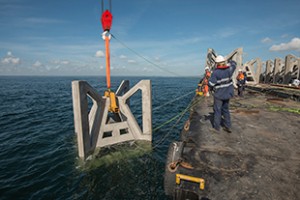 The Shoalhaven offshore artificial reef was deployed in January 2015 and is the state’s second offshore artificial reef. The 20 specially designed artificial reef modules used to create the reef stand 5 metres (15 feet) tall and weigh over 23 tonne each (over 470 tonne of reef!). The modules are built to last a minimum of 30 years (but will likely be much longer!) and are designed to withstand the forces generated by a 1 in 100 year storm, remaining perfectly in position. The modules will collectively form a complex reef system with large caves, crevices and vertical relief to suit a wide range of fish species. The artificial structure is being monitored by NSW DPI scientists to assess the effectiveness of the reef. 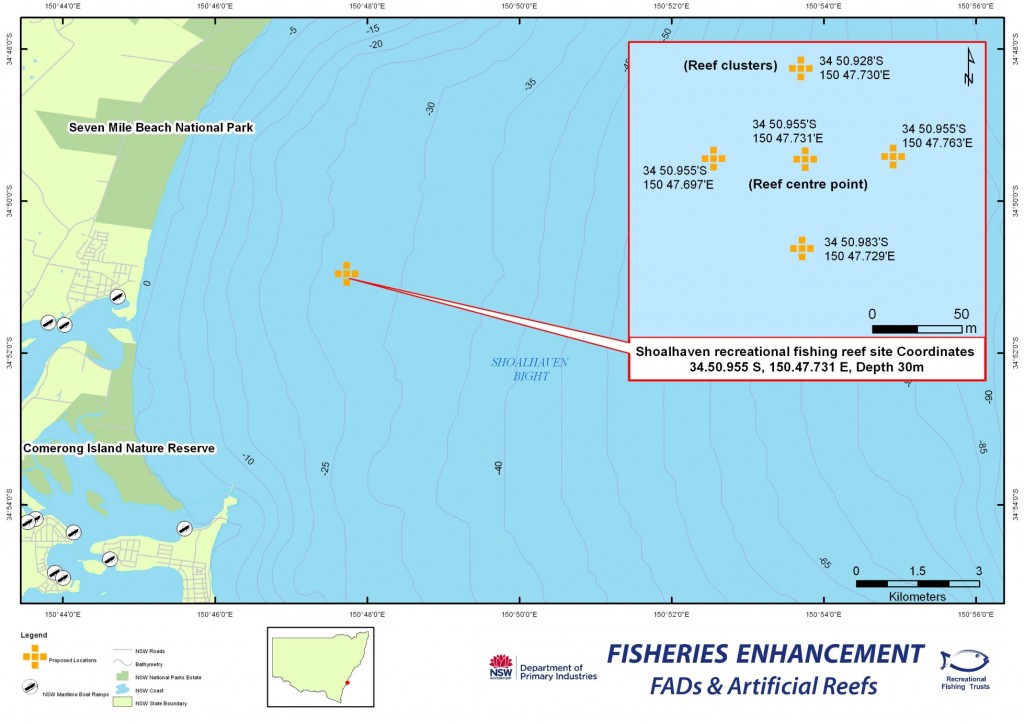 More than 460 tonnes of concrete will be dropped to the bottom of the ocean off Shoalhaven Heads next week.

Minister Katrina Hodgkinson and Member for Kiama Gareth Ward in front of a module for the artificial reef.

More than 460 tonnes of concrete will be dropped to the bottom of the ocean off Shoalhaven Heads next week.

The $900,000 artificial offshore reef will be constructed using 20 purpose-built concrete modules, each five metres high and weighing over 23 tonnes.

Minister for Primary Industries Katrina Hodgkinson joined Kiama MP Gareth Ward as the modules were loaded onto a barge at Port Kembla on Friday.

Both said the installation of the reef would make the Shoalhaven the state’s latest recreational fishing hot spot.

The structure is more than double the volume of the first offshore artificial reef, which was dropped off the Sydney coast in 2011.

“Each of the concrete modules is specially designed to be self-weighted with no requirement for additional anchoring,” Ms Hodgkinson said.

Mr Ward said the new reef would be a major drawcard for recreational fishers and would boost tourism opportunities.

“This artificial reef will create a new, high-quality fish habitat for a range of fish species and other marine life to benefit anglers in the region,” Mr Ward said.

“Bait fish will colonise the reef, which will then attract larger target species including snapper and kingfish, providing a great fishing location for boat fishers.”

The NSW government has revealed the site of the state’s second artificial offshore reef on the South Coast, which primary industries minister Katrina Hodgkinson said will boost tourism and recreational fishing in the region.

Announcing the reef location in Shoalhaven Heads on Monday, Ms Hodgkinson said between 30 to 50 giant concrete blocks would be sunk about four kilometres off the headland.

“This reef has been designed to create new, high quality fish habitat for a wide range of fish species and other aquatic life, and provide a productive fishing location for boat fishers,” Ms Hodgkinson said.

“Bait fish are expected to colonise the reef, which will then attract larger target species, including snapper and kingfish.”

The reef – which follows the success of NSW’s first artificial reef built in Sydney in 2011 – will cost the government about $900,000 and is funded from recreational fishing licence fees.

A third reef has been announced for the Port Macquarie area.

“The reef will be a boon for tourism and recreational anglers on the South Coast, being easily accessible from boat ramps within the entrance of the Shoalhaven River,” he said.

“I know how popular recreational fishing is and its importance to our local tourism economy.”

Final environmental approvals for the reef are still being obtained and the tender process for construction will begin next month.

It is expected to be built by October, the minister said.