The Heads Hotel Fishing Club weigh in was held on 11th October under blue skies and sunshine. We had a good roll up of anglers again with juniors keen to present their catch. There were some new anglers, both seniors and juniors which hadn’t weighed in this year, presenting good fish. There was a good variety of fish presented, Bream, Flathead, Taylor, Jewie and Kingies to name a few.  With the days of warmer weather and water temperatures approaching, the fishing can only improve. The Bar-B-Que was doing a good business for the anglers and visitors. The prawn trays were quickly snapped up by members and visitors anxious for a taste of summer. ‘Fish of the Month’ recipient for September species of Snapper was Tim Mangold for a 3.4kg snapper.

November will be a busy month for the fishing club with the next weigh–in on 8th November, the Ingleburn Charter Boat competition on Saturday 21st November. There are still a couple of spots available on our charter boat, a list is on the notice board. The Fishing Club Kids Christmas Party is on Saturday 28th November near the Bar- B-Ques by the river.  There will be a list on our notice board to list the children wanting to attend. 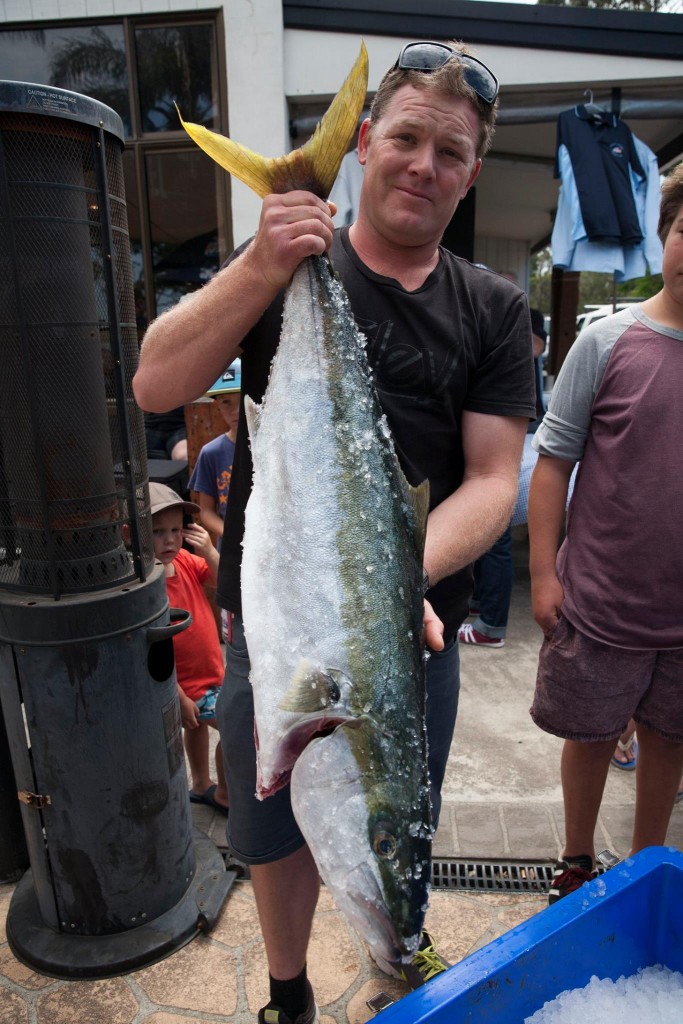 The Heads Hotel Fishing Club held a combined weigh in with the Heads Hotel Saltwater Fishing Charity Pub Challenge on 13th September. The Heads Hotel Saltwater Fishing Charity Pub Challenge ran from Friday night through until Sunday 1.00 pm. Saturday was a bit lean as far as the catches were concerned, some didn’t even get a bite but at least the weather was reasonable. Sunday, what a difference a day makes, beautiful weather and lots of fish being caught. Anglers had to keep a close watch on their bag limits (nothing I have ever needed to worry about).

We had a great turnout from our club with 13 men, 1 woman and 5 juniors fishing our comp along with the other clubs also fishing in the Charity comp.

The Heads Hotel Fishing Club held its second weigh in on 9th August. What a difference a bit of sunshine and calm breeze made to the day and the fishing. The water is still quite cold for fishing, but not so much for the anglers, as evident from the points below, with 8 seniors and 4 juniors fishing. There was a good variety of fish with Flathead, Ocean Perch, Luderick, Salmon and a good size Jewie, to name a few.

We have also cleared our biggest fish board, for fish caught at any time, inside or outside a competition weekend. The top line is the all time heaviest fish of listed species (usually standing for a number of years). The second line is the heaviest in the current fishing club year. This is subject to rapid changes during the first part of the year as anglers compete for the second line recognition. The next weigh–in will be on 13th September and run in conjunction with the Heads Hotel Saltwater Fishing Charity Pub Challenge. The charities to benefit from the Charity Competition are ‘Angel Flight’ and ‘Noahs Ark’. We are expecting keen competition against the visitors to the region.

The Heads Hotel Fishing Club held its first weigh in for the new club year on 12th July. The day was cold wet and windy, and was also the day after our AGM and Presentation Night. Only 4 fishermen weighed in after a night of celebrations with last year’s winners. No juniors weighed in, after an equally big night for them.

The weigh in diehards were:

The Heads Hotel Fishing Club held its final weigh in for the club year on the June, Queen’s Birthday long weekend, to encourage the participation of tourists coming to the Winter Wine Festival Events across the area. The day was cool but remained fine for a great roll up to the hotel, with much interest from the visitors in the weigh in and the fish presented. The juniors had a good turn out with 5 juniors fishing, and only 4 seniors weighing in. This may have been due to the wine tasting going on at various venues over the weekend.

It certainly was a family day with John and Rhonda Crane taking out the awards for Estuary men’s and women’s respectively. Deep Sea Men’s was won by Tim Mangold, Beach and Rock Men’s by Peter Ha.

The junior competition was also a family affair with both Lauren and Alex Kershaw taking out the junior girls and boys awards.

The winners and runners up for the final points for the year will be announced at the annual Presentation Night. After the presentations the full points list will be posted on the website on the ‘Point Score’ page.

We look forward to starting our new competition year on the weekend of the AGM and Presentation Night functions, 11th and 12th July.

Keep safe on the water

The Heads Hotel fishing club held its May weighin on the mothers day weekend with flowers and chocolates given to all mums enjoying a windy and overcast day at the Heads Hotel . Only three fishos braved the bad conditions chasing points in the second last weighin for the current year . Tim mangold found it tough going outside in the conditions to bring home a bag of Tailor and salmon and a few reef fish to win the deep sea division , Rudi Bochdal found a place in the river out of the wind to land some nice flatties , tailor and bream to win the mens estuary division and Peter Ha had the wind at his back on the beach to land some nice salmon and tailor , he gets the points in the beach / rock division . The leaders in each division are

Our last weigh in for the current season will be on the June long weekend 6th & 7th June . The AGM and presentation night will be on the Saturday 11th July  .

The Heads Hotel Fishing Club held its’ April weigh-in on the 11th & 12th and the weekend turned out to be not too bad considering it rained most of Saturday and the swell was still 2m plus but not the 4m it was earlier through the week.

A good roll up with 11 adults and 2 juniors fished in all the divisions with Tim Mangold took out the men’s deep sea division, Tamara Keg won the ladies deep sea, Steve Thompson took out the estuary points from Rudi Bochdal.

Men’s beach and rock division was won by Gary Powel closely followed by Peter Ha. In the junior divisions the deep sea went to Todd Mitchell and the estuary division went to Lincolin Ryan.

It was another great afternoon enjoying the scenery and a few beers listening to some great music in the beer garden overlooking the Shoalhaven River out to sea.

Thanks to all that fished and to those committee members that help out on the day. Eric Colebrook has been very sick lately and like the trooper he is came to the weigh in and took control of his BBQ area to feed the people.

Next weigh in is the May outing on 9th & 10th. The fish of the month for April is Whiting so get out there for your chance for a $50 McCallums Tackleworld voucher.

The Heads Hotel Saltwater fishing charity pub challenge is on again from 11th Sept till the 13th Sept check notice board or phone the hotel for registration or details.

The Heads Hotel Fishing Club held its’ monthly weigh-in on the 7th & 8th March with a good roll up with 11 adults and 3 juniors all presenting some nice fish to the weigh master. There were some nice snapper up to 3kg, Bonito, salmon, bream and flathead weighed in. The winners for March were Grant Taylor for deep sea with Guy Jamieson runner up. Rudi Bochdal won the men’s estuary with Steve Thompson runner up. Peter Ha won the men’s beach & rock division. Juniors saw Tom Palmer taking out the boy’s estuary with his little sister taking the girl’s estuary points, Cohan Scott returned from a trip around Australia with mum and dad to win the junior deep sea division. All won vouchers from McCallums Tackle World in Nowra. The BBQ for the members and all the visitors was a huge success with the steak, sausage and rissole sandwiches selling out very early, will have to stock up with more tasty meat from Nathan & the boys from Mountainside Meats. With Woody the entertainment in the beer garden, what a great way to spend a beautiful Sunday afternoon sipping a few beers or wines overlooking the beautiful Shoalhaven Heads.

Point score so far for the year

The next comp is against Macarthur districts fishing club on 21st & 22nd March with dinner for members on Saturday night and BBQ and weigh in Sunday at 1pm in the beer garden at Heads Hotel.

Thanks to all members that fished and help out on the day.

February 8th and 9th was the Heads Hotel fishos second weigh for the year with the conditions for deep sea not to crash hot with strong north east gale force winds up early and low tides resulting in some dangerous sea’s out the banks and the entrance to the Crookhaven . Gav and GT from Macallums tackle world on cranky found it tough going losing the fight with a couple sharks and landing some rat kingies but nothing to weigh in

There were no fish weighed in from deep sea so the estuary was the place to be , with some nice fish weigh in .There were plenty duskies up to75 -80cm , bream , tailor ,mullet and some big Luderick weighed in . Kim and myself had a shot at the beach only to catch some small whiting and stingrays before getting blown away by the north easterly. Winners on the day were,

The first weigh in for 2014 was held on Sunday 12th with great conditions all weekend both for estuary and deep sea . Plenty of fish were presented to the weigh masters including kingfish,blue mowies,travelly,snapper, leather jackets,sand & dusky flatheads, ludrick and bream . There were seven  members fished deep sea , six that fished estuary division,one lone beach fisho, Two ladies and three juniors so a good roll up in all divisions considering most are away on holidays . Winners on the day were ,Rhonda Crane, (  ladies ), Peter Ha( beach) , Rudi Bochdal ( estuary ), Tim Mangold ( deep sea ).,Fynn Shirlaw ( junior estuary ), Alex Kershaw ( junior deep sea ) Fish of the month was bream and that was won by Peter Risco . A great weekend of fishing and a great way to end it with a few beers in the beer garden over looking the beautiful entrance to the Shoalhaven river .